Thanks for visiting Long Beach Radio. Clicking on the orange bits above will give you more information about the station. Scroll down for weather forecasts and other useful stuff. The Blog below is intended as a compliment to our regular programming. Some of the items posted there may have been because they weren't appropriate for broadcast. (Web) Surfer discretion is advised.

Canada Day 2011 in Tofino and Ucluelet

Wondering what's happening for the big day and the whole Canada Day long weekend out here?
First Off; Long Beach Radio will be broadcasting almost 100% Canadian music from midnight June 30th to midnight July 1st. OH CANADA!!!
Also, we've compiled a little list, it's by no means complete so let me know if you have something going on.

- Long time friend of the station Mark Crissinger will be rocking the lounge at the BlackRock in Ucluelet with Mike Filipowitsch. No Cover, They will be in Tofino Friday and Saturday at the Weigh West as well. Again No Cover. Here's a video from a while back of the guys playing The Allman Bothers' "Whipping Post" with Mike's crew The Burt Neilsen Band


-Thursdays are also jam night at the Maquinna

-Kick-off of the Pacific Rim Arts Society Summer Festival with entertainment in the Village Green's of both Tofino and Ucluelet followed by 2 weeks of great events.

-BEVERAGE GARDEN: looks like they got approval for a beverage garden in Tofino again. 4-8 in the Tofino village green.

- Mark Crissinger and Mike Filipowitsch at the Weigh West in Tofino, No Cover

-Wolfheart are rocking the Maquinna.  They cat's look pretty sweet!!!

- FIREWORKS, historically both Tofino and Ucluelet have had fireworks in the harbour. Pack the docks or get out on a boat and enjoy.  Here's some iPhone video from the gang watching from right beside the Long Beach Radio studio. 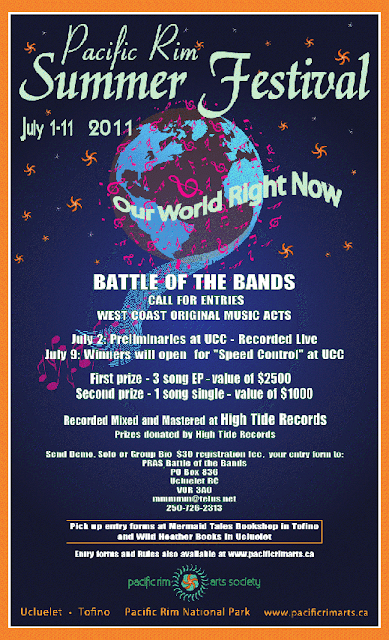 - Mark Crissinger and Mike Filipowitsch at the Weigh West in Tofino, No Cover

-Awesome Aussie band Blue King Brown and the Tofino Legion they were here last summer and ROCKED!!! Here's one of their early videos


More info and events to come.

Thanks for listening ot Long Beach Radio.
Posted by Cameron Dennison at 11:58 AM No comments:

I played this interview this morning. If you are interested in the proposed Raven coal mine on Vancouver Island have a listen.

Coming up on Saturday afternoon I'll be hanging out with Aussie guitarist Kim Churchill before he opens up the show at the Tofino Legion that night. Yasmin from the Westerly wrote a great article about him here
Or listen/ see for yourself

Thanks for listening to Long Beach Radio.
Posted by Cameron Dennison at 10:49 AM No comments:

Links to this post
Labels: kim churchill, raven coal mine

Catching Up On Some Recent Interviews

It's been a busy few weeks.... months even as we ramp up for summer, ate our way through Feast BC as well as Food and Wine Fest and pulled our hair out through the Stanley Cup Finals.  I'm usually pretty good at putting interviews up in a timely fashion... I apologize for the delay on the last 2 in this update.  Earlier this week I chatted with Calgary Flame and awesome guy Brendan Morrison about Fishing (and a little about hockey).  Check out www.tofinosaltwaterclassic.com and I'll see you on the water!!!


Meanwhile Carrie Ann has been partying like a rockstar with rockstars.  This first one is USS from a month or so back.


And here's Daniel Wesley, he promised he'd bring a guitar next time :P

Happy Father's Day on Sunday, Thanks for listening to Long Beach Radio.
Posted by Cameron Dennison at 3:01 PM No comments:

My thoughts on the 2011 Canucks Riot

Hi folks, I hope you enjoyed the exciting run the Canucks made this year on the Stanley Cup.  I hope you found the story of Manny Malhotra's recovery inspirational.  I hope that for at least a little while you really did believe.  I hope that the scenes of thousands of people gathered on the sunny streets of beautiful downtown Vancouver touched you in some way.  What I hope most though is that the actions of a few on Wednesday night don't totally devalue these positive moments.

I had the incredible good fortune to spend around 10 days in Vancouver during the 2010 Olympics.  There I felt blessed to be part of huge moment, with it's own stories, disappointments and triumphs.  During the games Vancouver carried itself with a poise rarely seen.  Despite a few instigators early on and some over zealous security measures around the Olympic cauldron Vancouver felt warm and safe, bright and colourful.... most of all, inviting.  Many on the Internet, I feel, are oversimplifying the events of the riot last night.  Many blame the city as a single entity, ashamed as residents, they feel obligated to carry some of the blame.  Many write it off as "too much booze". Some see it as sign of a greater socialogical problem, displaying what little it takes for a "sophisticated" society to fall into chaos.  I agree in some way with these assessments but I have a few other things I would like to say.

A crowd is a funny thing. Watching the little bit of coverage I have I noticed most of the people staying on the streets were doing so in order to get some sort of cell phone footage, perhaps their motivations were noble with them wishing to provide evidence or street level journalism.  In many cases I fear they were hoping to capture the graphic/ painful/ stupid/ violent/ whatever video that would get them a bunch of hits on YouTube. The end result of these people hanging out was that those who were starting fires and acting violently were difficult to engage and subdue without having to engage the crowd as a whole.  If people had dispersed instead of standing there a few idiot "rioters" would have been arrested after smashing some windows and starting some fires.  There would have been no mob and no riot, just some vandals.

Now I am in no way saying that people should not have to right to gather.  What worries me most is actually quite to opposite.  Vancouver went to great length to create downtown fanzones, closing streets and setting up massive outdoor screens where thousands gathered to watch the game.  I'm not too confident they will be interested in doing such a thing next time the Canucks make the finals.  This situation, born of something as trivial as a hockey game (though I suspect more born of the selfish actions of some sociopaths who couldn't care less about hockey and would have done something similar regardless of the outcome of the game) will be used as a reference for future public gatherings.  What I mean is that the next political convention, rights rally or whatever that may be a subject for legitimate protest will likely be subjected to more security, escalate more quickly or be outlawed altogether.

It saddens me to think that the actions of a few can have reverberating effects on the freedoms that we are supposed to enjoy in our society.  If these people have any sort of self-satisfied smiles on their faces today because they feel they have "stuck it to the man", "showed those pigs" or any other silliness it's simply not the case.  The Canucks lost last night, that sucks.  Freedom of Association, one of the core components that is intended to make our country free lost last night too, that is the tragedy.

I don't condemn Vancouver, I love Vancouver.  I certainly don't blame "the crowd" in downtown Vancouver.  You can't blame the Canucks or the organization behind them.  I haven't seen every minute of tape but I didn't see anything that I would call escalation from the police side of the event.  Some things may not have been handled well but I think the overall response was appropriate.  I think, as is almost always the case, media sensationalized the event.  But that's their job isn't it..... *cough

There is one picture I want to share. I don't know where it came from but I feel it captures the whole thing pretty amazingly.  A situation is what you make of it and making love is a lot more fun than starting a car on fire. 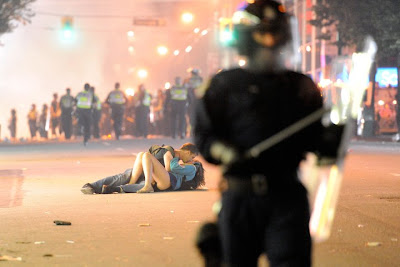 I still love you Vancouver, and I still hate douchebags.  Please don't mistake the actions of one for the other.
Thanks for listening to Long Beach Radio.
﻿
Posted by Cameron Dennison at 3:23 PM 2 comments:

The Vancouver Canucks can take home the Stanley Cup with a win in Boston tonight.  The Game starts at 5pm Pacific and We'll have it right here on Long Beach Radio.  Judging by the number of people who ran the Edge 2 Edge Marathon yesterday in Canucks jerseys there will be a lot of people excited to listen or watch.

If you're looking for a place to watch the game I'll be down at the Weigh West Marine Resort's Dockside Pub.  Shelter is another fine choice in Tofino.  Ukee visitors who want to sit down for the game might enjoy the ambiance of the Canadian Princess... watch the game from the galley of an 80 year old steam ship.

Thanks to all the sponsors that help us bring the season to the airwaves.

Our webstream is turned off during Hockey, if you're looking for a hockey stream online go here and get it from the source at TEAM 1040.

GO CANUCKS!!
Posted by Cameron Dennison at 10:50 AM No comments:

First things first.... Can I get a "Go Canucks!!!!"  Canuck fever is nothing new out here on the coast but a Stanley Cup final is bound to make it a little more contagious... It's even started to effect the local Bruins as this photo I took at Jamie's Whaling Station clearly shows. 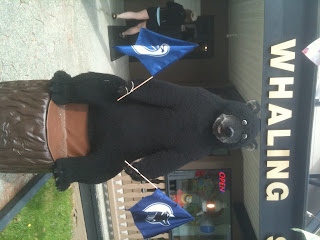 We'll have the whole final on Long Beach Radio so tune in for the games!!!

Feast BC wraps up this weekend with the 9th Annual Tofino Food and Wine Festival and I'm excited to say that the weather forecast is amazing.  20 degrees and sun for "Grazing in the Garden"? YES PLEASE!!!

Great concert this Friday at the Legion with 3 bands we play a lot; KO, Daniel Wesley, and Rebel Emergency... We gave away some tickets this morning and might do a couple more on Friday so tune in.

I picked up my Ucluelet Salmon Ladder Derby ticket yesterday.  I wonder what feels better? Helping the salmon hatchery or winning a bunch of money by doing so?  Hope I get to find out.

Speaking of fishing the Tofino Saltwater Classic Derby isn't far off either.  I can't wait to ask Brendan Morrison his thoughts after the Canucks win the cup.

The Edge to Edge Marathon is coming up on a week and a half or so on June 12th... if you're a lot more fit than me it seems there is still room to register and if the long-term weather report is to believed things should be pretty sweet. Also on the events calendar that weekend is the Ripcurl Stew surf competition.... with it looking almost certain that The O'Neill Cold Water Classic series won't be coming to the West Coast this year the Stew might be the most serious surfing we see in a while.

Although, serious surfing isn't always the most fun... I posted this a while back but here it is again.


Lastly, a little out of place but timely none the less here is a bit of audio from Feast BC

Arlo, First Place in The Feast BC, Mission Hill Grape Stomp (also some sort of "in his own mind" funny guy)

Thanks for listening to Long Beach Radio
Posted by Cameron Dennison at 1:39 PM No comments:


Try the "refresh" button if it's misbehaving 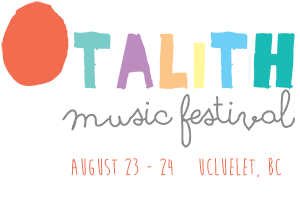 Comb the Beach - Search the Site